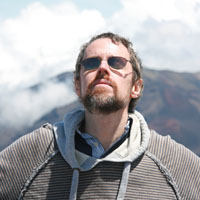 One of the exercises during my coaching training with the Coaches Training Institute (CTI) was to identify something that I couldn’t be with and then create opportunities to come face to face with this thing that I try to avoid at all costs. The idea is that, as a coach, we need to be able to be with those things that make us most uncomfortable in order to create a space where our clients can do the same.

We went around the circle and each person received some coaching from the group and course leaders to help them get crystal clear on that one thing they really couldn’t be with. Once identified, that most scary thing was written on a name tag that we wore for the rest of the day as we were challenged and called forth by the rest of the group. Sounds like fun, eh?

My name tag read “Uncertainty”. I discovered that I liked having assurance about how things were going to go in life and not knowing was a source of stress. It was quite a relief to take off my “Uncertainty” name tag at the end of the day. Little did I know that this lesson was far from complete.

Several months later I started to develop pain in my lower back and chest, which came and went in an unpredictable way. I saw four different doctors on five different occasions, but none seemed very certain about the cause of my grief. I had a number of sessions with a chiropractor who though that a spinal adjustment would help, but the pain continued to worsen and the uncertainty around my health continued to grow.

Eventually the pain got so intense that my wife, Christa took me into the emergency room of our local hospital. Despite having two teams of talented doctors assigned to my case the prognosis was far from clear – one was confident that it was a kidney stone and another mentioned the possibility of cancer. Many days and countless tests later it became increasingly evident that cancer was the source of my pain. Though, it wasn’t clear what kind of cancer it was and there was no sign of a tumour, which didn’t help. Eventually the doctors got to a point where they were reasonably certain they had an accurate diagnosis and recommended that I begin chemotherapy immediately so that the cancer didn’t have a chance to spread further.

The uncertainty continued. I didn’t know for sure if this was the right course of treatment, if I’d respond to the chemo and if I’d require surgery once the treatments were finished. There were even fleeting moments when I wondered if I’d live to see Christmas. Fortunately the year ended on a very positive note. After four intensive rounds of chemo and a major surgery I was given the gift of a clean bill of health, just in time for Christmas.

Through the process, I discovered that I could face major uncertainties in my life and live to tell the tale. Not knowing exactly how things were going to go created a state where I was very present and granted me a new appreciation for the gift of my life and for all the love that surrounds me. When faced with all this uncertainty my priorities in life became crystal clear – it’s amazing how certainty is born out of a state of uncertainty. But, I guess that’s how life works. Light can’t exist unless there’s darkness to be illuminated.

I welcomed in 2009 brimming with enthusiasm and gratitude. I still like having some certainty in my life, which must mean I’m human. At the same time I’ve come to see uncertainty as a gift. Deepak Chopra talks about uncertainty as the seed of creativity and ultimately it’s not knowing how things are going to go that makes life’s journey such a magical one. Uncertainty creates a space where anything is possible. I’m learning to trust myself and my intuition when the path ahead isn’t clear and know that whatever shows up there are always opportunities to learn and grow.

If you find you’re struggling when it comes to uncertainties in your life I invite you to try on a different perspective. Celebrate life’s uncertainty. Take it as a reminder that each moment in life is a sacred gift and bow to the teacher in all things.

Originally posted on CoachingLife.ca on February 4, 2009.