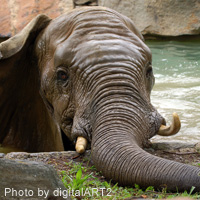 The following poem was written by a 19th centry American poet by the name of John Godfrey Saxe. It recounts the parable of the Blind Men and the Elephant that has been told by Sufis, Jainists, Buddhists and Hindus over the years.

As the title implies, the poem tells the story of six blind men who went to see an elephant, “though all of them were blind”. Each man touches a different part of the elephant and comes to his own conclusion. For example, one touches the side of an elephant and decides the elephant is like a wall and another feels its mighty tusk and likens the elephant to a spear.

As humans we have a tendency to define our own realities based on our education, cultural background and experience combined with input from our five senses. It’s all too easy to fall into the trap of believing we know the truth, when all we can ever hope to grasp at an intellectual level is an aspect of the truth. If we approach life solely from a perspective of intellectual understanding we’re inherently limiting ourselves and inviting inner and outer conflict.

I have always had a fascination with science and technology. I went through a period in my life where I sought to understand the world and tended to dismiss anything that couldn’t be scientifically proven. It was when I engaged in practices such as yoga and reiki that I started to open myself to an experiential world that transcends the intellect. It was a major breakthrough for me to be willing to engage in an and accept an experience for what it was – without the need to understand it scientifically. In the words of Albert Einstein:

The most beautiful thing we can experience is the mysterious. It is the source of all true art and all science. He to whom this emotion is a stranger, who can no longer pause to wonder and stand rapt in awe, is as good as dead: his eyes are closed.

Another perspective on these teachings was summed up very succinctly by a coach who led one of my leadership training programs:

To be happy you have to give up being right.

Imagine what the world would be like if everyone, or even a sizeable percentage of the population adopted this philosophy. There would be harmony in relationships and wars over cultural ideologies and religious dogma would be a thing of the past. Instead we would open ourselves up to the realities seen through others’ eyes and maybe one day even catch a glimpse of the entire elephant.

Without further ado here’s the poem:

It was six men of Indostan
To learning much inclined,
Who went to see the Elephant
(Though all of them were blind),
That each by observation
Might satisfy his mind.

The First approach’d the Elephant,
And happening to fall
Against his broad and sturdy side,
At once began to bawl:
“God bless me! but the Elephant
Is very like a wall!”

The Second, feeling of the tusk,
Cried, -“Ho! what have we here
So very round and smooth and sharp?
To me ’tis mighty clear
This wonder of an Elephant
Is very like a spear!”

The Third approached the animal,
And happening to take
The squirming trunk within his hands,
Thus boldly up and spake:
“I see,” quoth he, “the Elephant
Is very like a snake!”

The Fourth reached out his eager hand,
And felt about the knee.
“What most this wondrous beast is like
Is mighty plain,” quoth he,
“‘Tis clear enough the Elephant
Is very like a tree!”

The Fifth, who chanced to touch the ear,
Said: “E’en the blindest man
Can tell what this resembles most;
Deny the fact who can,
This marvel of an Elephant
Is very like a fan!”

The Sixth no sooner had begun
About the beast to grope,
Then, seizing on the swinging tail
That fell within his scope,
“I see,” quoth he, “the Elephant
Is very like a rope!”

And so these men of Indostan
Disputed loud and long,
Each in his own opinion
Exceeding stiff and strong,
Though each was partly in the right,
And all were in the wrong!

So oft in theologic wars,
The disputants, I ween,
Rail on in utter ignorance
Of what each other mean,
And prate about an Elephant
Not one of them has seen!