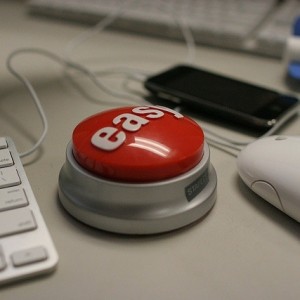 At the risk of dating myself, I have vivid memories of a “simpler” time when there was no voicemail or e-mail.  When the only “spam” you had to deal with was the occasional flyer that would show up in the mailbox. If you didn’t make it to the bank by closing time on Friday you had no cash for the weekend and if you wanted to take a trip somewhere you went to the local mall and leafed through glossy brochures under the guidance of a travel agent. Wondering what’s going on in the world? Your options were to stroll down to the local news stand or wait for the six o’clock news to air on the radio or television.

The Rise of Modern Technology

I watched the introduction of the first calculators and personal computers with a child-like wonder (not surprisingly, as I was a child at the time). I can remember getting up bright and early to spend fifteen minutes with one my school’s few Commodore PET computers and even getting my hands on a SuperPET or an Apple II on occasion. I was thrilled when my Dad brought his Hewlett-Packard calculator home for the weekend and managed to program it to accept input and print the results of calculations on paper tape.

I remember all the debates that sprang up at the time. With the advent of technologies like instant tellers, there was one group who were purveyors of doom and gloom – who were adamant that modern technology would lead to wide-spread unemployment. After all, why would a bank hire a teller when a  machine could do their work for a fraction of the cost? At the other end of the spectrum, proponents of these modern trends pointed to all the new jobs that would be created to satisfy the world’s hunger for technology. They were also quick to point out that computers are well suited to mundane, repetitive tasks that nobody enjoys doing anyway. Automating these tedious tasks would mean that us humans would have and abundance of time to enjoy the finer things in life – music, art, literature.

As a wide-eyed teenager in the seventies I was firmly in the second camp. I’m a naturally creative person and saw modern technology as a vehicle with great potential – an opportunity to expand my world and stretch the limits of my imagination. My intrigue led me to pursue a degree in Electrical Engineering with a Computer Systems Engineering focus and to employment as a software developer and project manager on varied and complex software projects.

Welcome to the Future

I’m in awe at how far technology has come in a very short time. In many ways, it has far exceeded the prophecies of the seventies. Technology that, not long ago, was the stuff of science fiction is readily available to the average consumer. Boggling amounts of up-to-date information is accessible at the click of a button and communication, even to the other side of the planet, happens in a blink of an eye and often without a second thought.

Even as I marvel at our technological world, I also witness lives that are out of control and hear stories of excessive stress and overwhelm. It’s all to easy to become distracted by all the “noise” and it’s equally easy to become obsessed with all the tools we have at our disposal for connecting and communicating. If anything, life feels more complicated than it was in the seventies and, especially in our Western culture, I’ve noticed that there’s less emphasis placed on core human values and the finer things in life.

Fast Forward and Out of Control

So, what happened? Why all the stress? I see two core issues at the source of our woes. First of all, a high level of personal discipline is required in order for technology to serve us and not end up being a source of stress. Having a lot of power and information at our fingertips is, in some ways, akin to having a mountain of financial wealth. Sadly people who win lotteries too often don’t go on to live happy and prosperous lives. In fact it’s quite the opposite – their lives tend to be ruined as they don’t have the capacity to deal with their new-found wealth. There’s nothing inherently wrong with having money, just as there’s nothing inherently wrong with having access to technology. What is often missing is a balanced and constructive way of relating to this abundance.

The other core issue is that people generally aren’t taught how to use technology effectively. Instead we tend to be thrown into the middle of it all and are somehow supposed to figure out how all the parts fit together. Add in the myriad of marketing promises, many of them grossly overstated, and it’s not surprising that modern technology has led to so much confusion. People are worried about being left behind and not sure which “band wagon” to board.

I feel called to serve in both areas. I have been practicing yoga and meditation for the past fifteen years and teaching since 1999 and see how this ancient technology is needed more than ever in our modern civilization. Getting in touch with our core essence and developing mental discipline is key to not only surviving, but thriving in this fast-paced world we inhabit. A strong sense of self is more important than ever and is something that needs to be cultivated.

I’m also professionally trained as a coach. It’s not surprising that this professional has grown significantly in the wake of our technology advancements. Working with a coach can foster creativity and clarity and can be a powerful way to maintain focus in a world that is full of temptations and distractions.

The world of technology is frequently and appropriately referred to as a jungle. It’s an exciting space to be in and one that can easily become disorienting and uncomfortable to the uninitiated. Having grown up in the technology jungle, I feel well equipped to act as a guide and strive to help others feel at home while experiencing the marvel of this brave new world. This quest exists at a very practical level – as a guide my mission is to separate the substance from the hype and demonstrate, largely by example, how freeing technology can be. The jungle can be a dangerous place and I’m equally committed to pointing out the pitfalls along the way.

This officially marks the beginning of a series of blog posts that delve more deeply into both areas. I’m not sure where this will go, which makes the journey all the more exciting. I’ll talk about specific technologies, with the focus being on how they can be used to make life fuller and richer, rather than on the technology itself. I’ll give plenty of practical examples from my own life and I encourage you to share your own experiences and wisdom.

Care to join me? 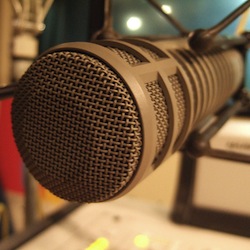 I’m excited to announce that I’ve invited to be a guest on Drishti Point, “Vancouver’s Yoga Radio Talk Show”, on Monday, June 21 from 5-6pm. This will be my first live radio experience! I’m very much looking forward to hitting the air waves and feel honoured to have been asked.

I’ll be talking about my journey through cancer from the perspective of a yoga teacher and student. Specifically I’ll share the profoundly positive impact that my training as a yogi had a on my healing process and the role that my yoga communities, or sangats as they’re sometimes called, played in my miraculous recovery. I’ll also share some of the many lessons and insights that my bout with cancer has taught me.

If you’re in the Vancouver area, tune your radio to 102.7 FM to listen in. You can also listen to the show live at www.coopradio.org. Thanks in advance for tuning in and I welcome any feedback you have! 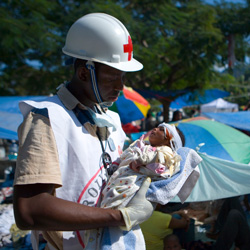 To support the people of Haiti in healing and rebuilding following the devastation of Tuesday’s earthquake I’m donating all proceeds from my next two Monday evening Kundalini Yoga classes (January 18 and 25) to the CMAT (Canadian Medical Assistance Teams). Both classes will include a healing circle meditation – an opportunity to send healing to Haiti at a more spiritual, energetic level.

A member of the Yoga West sangat (spiritual community) is flying to Haiti on Sunday with the CMAT to help set up a self-contained field hospital and to treat the victims of the disaster. I acknowledge him for his courage and willingness to serve and am happy to support this initiative. As an added bonus, the Government of Canada will be matching all donations made to the CMAT.

Please see my yoga classes page for more information on the Monday evening Kundalini Yoga class and please feel free to contact me if you have any questions. If you are unable to attend the class, but would still like to support the CMAT you can make a donation through their website: www.canadianmedicalteams.org. 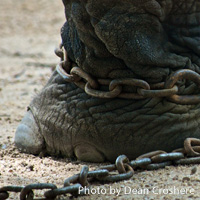 Baby elephants living in captivity are often secured using a chain. Elephants like to roam around by nature, and the young elephant instinctively tugs and pulls at the chain in an attempt to gain its freedom. Eventually the small elephant grows tired and concedes defeat – it’s not yet strong enough to free itself from its shackles.

What’s interesting is that the same chain can be used to restrain the elephant even after it reaches its full size. At this point the elephant is strong enough to snap the chain and maybe even uproot the tree it’s attached to, but the powerful animal doesn’t even attempt an escape. It remembers its futile efforts in the past and believes it’s incapable of breaking free.

As humans we all define our own limitations, often in very subtle ways. Something happens in our life, usually during our formative adolescent years, and we make a decision about ourselves and the nature of life. These patterns become so engrained that they become part of our reality. It is only by realizing that these patterns exist that we can consciously choose to break free of our own self-created shackles.

Seeing our own patterns is not always easy as they become part of our identity. Even after coming face to face with our self-fabricated limitations, letting go of patterns that hold us back is often confronting to our ego. The tendency is to take the path of least resistance and accept the status quo. The cost is that our freedom, self expression and potential for happiness and fulfilment remains limited.

I’ve identified many of my own patterns over the years. In many cases the patterns are still there, but I’ve become more practiced at recognizing them and more adept at breaking free. I have been practicing meditation for many years and have found this ancient practice to be a valuable tool for bringing unconscious thought patterns into my conscious mind. I have also found coaching to be an effective tool in this realm. Working both one-on-one with a coach and in group contexts I’ve been able to identify many of my own “saboteurs” and have been called forth to set them aside and experience my own potential.

I invite you to expose your own self-limiting beliefs…and experience the exhilaration of boldly breaking free!